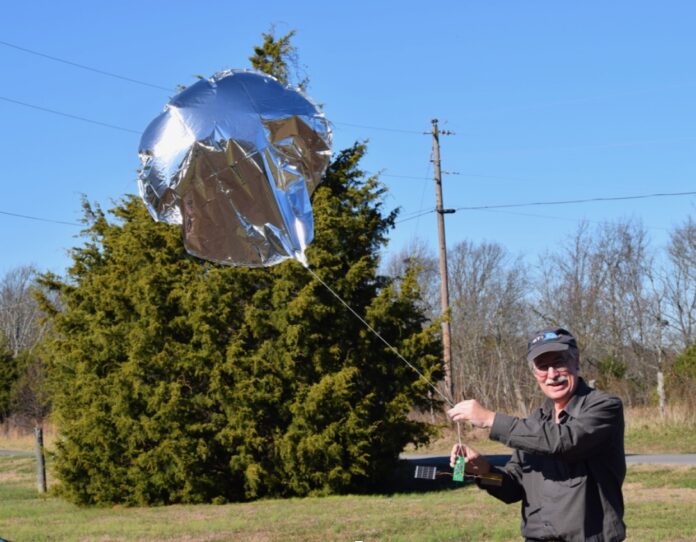 A pico-balloon is a 3 foot mylar foil party balloon, filled partially with ultra-pure helium, and carrying a 13 gram solar-powered APRS transmitter. The balloon is intended to travel for long distances (not to achieve heights) and is not intended to be recovered. These balloons have literally circumnavigated the globe — even multiple times — before finally decending.

The balloon reports its position via APRS every 2 minutes, and will continue to beacon whenever the sun illuminated its solar panels. The tracking payload is powered 100% by solar. 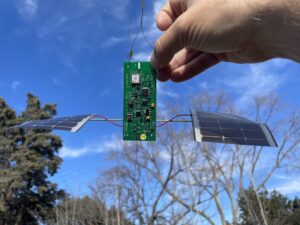 RMHAM’s balloon was launched at 8:30AM MST, just before the 2021 New Mexico TechFest kicked off on Saturday, February 27. By the conclusion of the event (around 4:00PM MST) it had floated across seven states — NM, OK, CO, KS, NE, MO, and IA — at an altitude of nearly 27,000 feet and speed of 120 MPH. When it was 67 miles SSW of Des Moines, Iowa the sun was too low to illuminate the tracker’s solar panels so it stopped transmitting for the night. By morning of February 28 the balloon should have been over the Atlantic ocean where, unfortunately there are no APRS digipeaters to receive its beacons.

Below is the output of a NOAA model (click image for a larger version) which shows the balloon’s projected flight path. It’s based on where the balloon was when the model was run along with projected weather modeling. The time references on the plot are hard to read, but the triangles are spaced 6 hours apart. The large triangles represent 00:00 UTC on a given day. If RMHAM’s balloon makes it safely across the Atlantic ocean and the weather model doesn’t shift too much its next APRS beacon should be received over Europe on Tuesday, March 2 or Wednesday, March 3.

If you’d like to track the progress of the RMHAM pico-balloon (when the balloon’s tracker is powered by the sun in daylight hours), check out either of the following websites. Will it make it across the Atlantic ocean to Europe? We’ll know some time on Tuesday, March 2 or Wednesday, March 3.  Stay tuned.

RMHAM-NM plans to conduct at least two more launches from Albuquerque this spring/summer. COVID permitting, interested amateur radio operators will be invited to participate in the launch in-person, learn about pico-ballooning, and learn about Rocky Mountain Ham Radio. One of these launches will carry a 15 gram 20-meter HF WSPR payload which will allow tracking even while the balloon is over oceans.